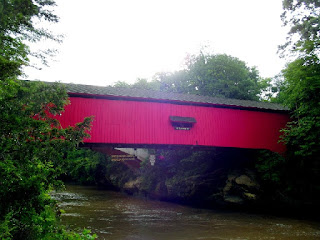 Narrows Covered Bridge
Constructed by Parke County bridge builder Joseph A. Britton, this 121 foot long covered bridge spans Sugar Creek. Many consider this bridge the first one constructed by Britton, whose first wife died while he was building it. He met his second wife, who lived on a nearby farm, while working on it. Two other bridges had spanned the creek at this site previously. Both called the Salmon Lusk Bridge, they first one lasted from 1840 until 1847. The second one from 1847 until 1875. The 1882 Narrows Bridge replaced the second one. The current concrete bridge that carries Narrows Road over Sugar Creek bypassed the Narrows Bridge in 1966.
Most Visited Bridge
The Narrows Covered Bridge is the most visited bridge in Indiana. It carries Narrows Road over Sugar Creek, however it is not open to motorized traffic. Hikers may cross the bridge and enjoy the view of Sugar Creek and watch canoeists float by.  Three of the trails at popular Turkey Run State Park cross it and hundreds of canoeists each year pass under it each summer on their way down Sugar Creek. The bridge is open to pedestrian traffic only. The National Register of Historic Places listed it on December 22, 1978.
Bridgehunter.com ID BH 44674
Joseph Albert Britton (June 9, 1838 – Jan. 18, 1929)
The son of   Charlton and Julia Britton, Joseph was native to Rockville, Indiana. He spent his boyhood in a log cabin while his father taught him the carpenter trade. Known locally as J.A. Britton, Joseph constructed over 40 covered bridges in Parke, Putnam, and Vermillion counties during a 33 year period.
Civil War
After the outbreak of the Civil War, Brittan enlisted in the Eighty-fifth Indiana Infantry, Company A. The Confederates surrounded his company during their first engagement on March 5, 1863 and captured them. The Confederates held them until March 31 at Libbey Prison. On that day they took part in a prisoner exchange and returned to combat. The Company returned to action and mustered out June 12, 1865 .
Law Practice
After leaving the army, Britton read law and gained admittance to the Indiana and Kansas bars. He practiced in Kansas, but decided he did not like law practice.
Return to Rockville
Thus, he returned to Rockville and took up carpentry, building houses until around 1879. He started building covered bridges in that year, and would continue building for another 33 years. His first contract for a bridge came in 1882. This was the Narrow's Bridge that is now in Turkey Run State park. He preferred the short, Burr Arch Trussone span bridges. Many of his bridges are listed on the  National Register of Historic Places.
Britton would marry twice, the first time to Mary E. Jones on Sep 25, 1862. Mary died in 1884 and he married Bertha Hirshbruner on September 13, 1888. he would have eight  sons and four daughters. Several of his sons entered the bridge building business.
Joseph Albert Britton died in 1929 and is interred in Rockville Cemetery. 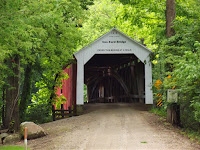 Cox Ford Covered Bridge
Constructed in 1913 by renowned bridge builder J. A. Britton, the Cox Ford Bridge carries Cox Ford Road over Sugar Creek on the southern border of Turkey Run State Park. The burr arch-truss is 191 feet long, 15 feet wide and is 13 feet above the creek level. The National Register of Historic Places listed the bridge on December 22, 1978. The park incorporated it into its care in 1965. The Cox Ford Canoe Ramp is a short distance downstream from the bridge and allows public boat access to Sugar Creek.
Posted by Paul at 1:23:00 PM