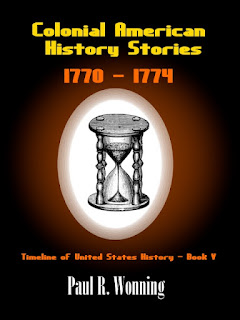 Colonial American History Stories - 1770 – 1774 features an historical chronicle of the pre-revolutionary years of the United States. The time line presents a journal of events that led to the conflict between the British and their North American colonists. The events, some obscure and almost forgotten, played a role in the developing drama that eventually led to American independence.