Kingdoms in Chaos
Paul R. Wonning
The Fall of Torne

High above the hills above the city a group of people hurried along a narrow path. Queen Betsa stopped for an instant to survey their surroundings. Below them, they could see the fires of the city of Cleery as it burned. Gwaum stalked the city. On occasion, he stooped to pick up some morsel to feed on. Screams, muted by distance, rose in a terrible shroud of sound from the destruction.
Ignoring the terror that slithered down her spine, she turned to search the rocky bluff that towered over the trail. A familiar landmark teased her eye. Pressing against a rock a rumbling sound announced the opening of a dark crevice in the bluff. She pushed the young prince into the dark opening. "Go, Ruther. I will come soon."
"Enter the crevice," she said to the line of people behind her. "Go now, before Gwaum turns to see us."
One by one, the refugees scurried into the crevice. As the last one entered, she stepped inside.
Servants had lit the torches and they lent their smoky odor to the already acrid air. She pressed a stone besides the opening and the crevice closed. She looked at the Prince as he stood facing her. A torch flickered behind him, shrouding his face in darkness.
She closed her eyes for one moment. By now, the king had surely met his fate. This morning she had awakened full of hope that the wizards would prevail and that they would defeat the monster. The horror of their fall and then the crushing defeat of the last of the king's army changed her life forever.
Queen Betsa opened her eyes. She was now the leader of her people and this dark cavern was her realm.

Quest of the Wizard
Paul R. Wonning
Book 1 – The Wizard of the Golden Star
Death in the Forest

Death moved relentlessly through the forest, making little sound as it crept along, hunger biting at its innards. Emerging into a clearing, the creature’s eyes swept the meadow beyond. A cottage lay at forest’s edge. A thin curl of smoke wafted from the chimney. The creature sensed the smell it sought. Humans. He would feed.

The afternoon sun caressed the land with its golden rays. Beneath its watching eyes, a boy gathered red berries at the forest’s edge. His pail was almost half-full when he heard his mother’s call.
“Arii. Arii honey, it is time to come home. Your father is here and dinner is ready.”
Arii paused and looked in his bucket. The berries’ fragrance nibbled at his nose. His mother made some of the best red berry pie in the valley. He glanced back at the cottage that stood at the edge of the meadow where he was gathering berries. He saw his mother looking for him, her hand shading her eyes as she scanned the meadow. When she sighted him, she waved and then she went back inside.
It took a full bucket of red berries for a pie. He did not have enough. He looked back at the berry patch. Fresh red berries glistened in the sun, inviting him to pick more. Overhead, he could hear the chatter of birds as they awaited his departure so they could resume their feast on the delectable fruit. Just a bit further on he could see a large clump of berries. That clump would finish his bucket. It would take just a few minutes more and he would have enough.
He worked his way further into the patch, the thorns tearing his clothes and scratching his bare arms and legs. He regretted not listening to his mother’s warnings to wear thicker clothing. But the weather was warm and he did not want to get hot and sweaty.
He reached the clump and filled his bucket. Arii was happy. The bucket was full. He turned to walk back to his home. The sound of crashing trees in the forest behind his home swept across the meadow. Arii watched in terror as a huge oak fell, smashing the cottage. His feet froze to the ground as a huge red monster stepped from the forest. A single, hungry fiery red eye bored into his eyes as the creature stood towering over the meadow. He could see his mother, holding his baby sister, wriggle through a window, escaping the ruined cottage. His father followed. He looked up and saw the creature. He interposed himself between the monster and his family.
A huge red hand reached down and grabbed at the man, who turned to flee. He was too late, and the hand clasped him. Arii could hear the crunching of his father’s rib cage as death cut short his scream. Blood flowed from his mouth. The monster raised the man, and with a single gulp, swallowed him. His mother backed away. Her foot caught on a log. She tripped. The monster caught her by the foot, and picked her up.
With upturned maw, he dangled the screaming woman over his head, the baby dangling from the terrified woman’s hand.. The baby slipped from her grip and fell into the black, gaping mouth. The woman followed her child an instant later.
Terror froze Arii’s breath and chilled his heart. The monster belched. He then looked at Arii. A smile played across Gwaum’s face. One more small morsel would finish his meal. He began striding towards him.
Arii dropped his bucket of red berries. The bucket spilled, and the red berries stained the boy’s bare feet. He backed up, slowly at first. Then he turned and ran. He could hear the giant feet of the monster thumping hard on the ground behind him. He ran faster and faster. He reached the trees and fled deep into the forest. The thumping behind him stopped, but Arii ran harder, flung on by his fear.
On and on he ran, until exhausted, he fell at the edge of a small stream. A huge log lay in front of him, dead and hollow. He crept into the log. The rotting wood was dank in his nose as it flaked away. White grubs, exposed from the disturbance, wriggled and burrowed deeper into the wood.
The sun fell. Darkness descended and the night sounds began. Narls howled in the distance. Arii pulled himself deeper into the log, tears of grief and fear falling from his eyes. Exhaustion crept upon him and he finally fell asleep.

Gardener's Guide to Growing Beets
Beets are one of the most popular vegetables to grow in the garden. The sweet earthy roots nutritious source of vitamins, minerals other nutrients. The Gardeners' Guide to Growing Beets serves as a valuable resource on the culture of growing beets as well as instructions on how to freeze, can and harvest this delicious, popular food. No vegetable is complete without a patch of beets to offer its share of summery sweetness.

Email ThisBlogThis!Share to TwitterShare to FacebookShare to Pinterest
Labels: Gardener's Guide to Growing Your Vegetable Garden

Epic Fantasy Novel - The Rise of the Pirate King 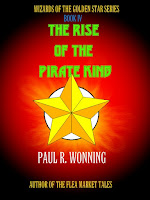 Epic Fantasy Novel - The Rise of the Pirate King
Under the vicious assault of Gwaum, the Kingdom of Sylvanhaven fell. The few that fled the catastrophe barely escaped with their lives.  The wizard Tarque rescued Prince Bearl, heir to the kingdom, only to fall victim to pirates. The pirate captain Bort found the magic Sword of Vin and used its powers to become the dreaded Pirate King.

$3.00 Shipping
Also In This Series
Quest of the Wizard
Kingdoms in Chaos
Wizard's Tales
Legend of the Wizard Tarque
The Rise of the Pirate King
The Wizard King