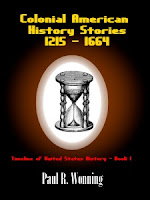 Colonial American History Stories - 1215 - 1664
Colonial American History Stories - 1215 – 1664 contains almost 300 history stories presented in a timeline that begins in 1215 with the signing of the Magna Carta to the printing of the first Bible in Colonial America in 1664. The historical events include both famous ones as well as many forgotten stories that the mists time have obscured. These reader friendly stories include:
June 15, 1215 - King John I signs Magna Carta at Runnymede England
October 19, 1469 - Ferdinand and Isabella Marry, Uniting Aragon and Castile
August 3, 1492 - Christopher Columbus Sets Sail On His First Voyage
July 22, 1587 - Lost Colony Established
June 14, 1623 - First Breach-Of-Promise Lawsuit In Colonies
August 29, 1619 ? - First Blacks Land at Jamestown Virginia

Buy Direct from the Author
$60.00
All six volumes take you through colonial American history from Christopher Columbus' first voyage to the beginning of the Revolution. Explore the fascinating years that shaped the United States.
$72 Retail Value
$60.00 -
$3.00 Shipping

Bernie Fuller was a dog. He enjoyed women. In fact, Bernie enjoyed a lot of women. Being a dog did create problems. Right now his problems were named Kate and Melanie. His amorous activities with Kate the previous night extended into the morning hours. He overslept. He awoke, looked at the clock and bolted from bed. He could tell from the look on her face that Kate wanted him to stay. He showered, dressed and roared off on his motorcycle, leaving Kate pouting in her bed.
Now he was late for his breakfast date with Melanie. His head was still clouded with wine, and his judgment was hazy. He gunned the motorcycle as he sped down the straightaway. The curve came up faster than he anticipated.
Too fast, the motorcycle entered the curve. Its rubber tires clawed at the loose gravel. The bike left the road, vaulted the ditch and slammed into a massive oak tree. A flock of crows resting in the tree were startled into flight by the impact, crying "caw, caw, caw,” as they flew off. Centrifugal force flung Bernie into a woven wire fence, which was nailed to the base of the tree. A honeysuckle vine covered the fence, bright with yellow blooms. It hummed with bees gathering the nectar. He fell at the base of the fence. His blood flowed, enriching the fragrant green grass beneath him. He was conscious only of pain. Blackness swallowed his last vision of the blue summer sky.
Bernie opened his eyes. He raised his head and glanced around at an unfamiliar room. Why was everything so tall? He realized that he was lying on a pillow in a box on the floor. He looked down at his hands. Instead of hands he saw furry little white paws.
"Strange," he said. But what he heard was "Arf."
A heavy set woman wearing a brightly flowered dress entered the room. The crow’s feet around her eyes betrayed a much different age than indicated by her youthful looking blond hair.
"What's wrong, Cuddles. Is my little baby hungry?" she asked as she looked at him through eyes heavy with mascara. The air was thick with her perfume.
Cuddles? What kind of a name was that?
“Arf,” he heard himself reply.
The woman left the room. Bernie could hear the sound of a cupboard door opening. The whirring sound of an electric can opener was followed by the clink of a can lid snapping open.
As he pondered his predicament, a scene which happened a few weeks earlier played through his memory.

The room above the Lester’s garage smelled of cigar smoke and stale beer. Bernie was playing poker with the boys, a cigar clenched between his teeth. The cards in his hand formed the worst hand of the night, and that was an accomplishment. His rent money lay in front of Moocher. He glanced at his remaining cash, strewn on the table in front of him.
He removed the cigar from his mouth and tapped it on the ashtray, knocking loose the powdery ashes on the end.
“I’m out,” he said, throwing his cards down. “This hand stinks.”
“You can’t quit after the cards are dealt,” Moocher said. “You have to play this one out.”
“I already lost my rent. If I lose this hand, the power company will shut off my electric.”
“You should have thought of that before you called that last bet,” Davy said.
Bernie looked at his tiny pile of cash on the table and thought about the dilapidated state of his finances. "When I die, I want to come back as some rich fat old lady's dog,” he said. “Just lie around and sleep all day. Then eat chopped steak out of a silver bowl. What a life."

His mind fast forwarded to the last thing he remembered. His motorcycle was a twisted wreck. He could see the blue, cloud studded sky. The scent of honeysuckle filled his senses. He could hear the sound of buzzing bees. Pain devoured his soul. Then there was blackness. He looked again at his furry little white paws. His lighthearted wish had come true. He hated yappy little dogs. And now he was one.
He looked back up at the lady. This is a dream. He wanted to pinch himself. But he had no fingers. Only furry little white paws.
"Come on, Cuddles, I’ve put your favorite treat in your bowl," he heard the woman call.
He went into the kitchen, his claws clacking on the hard tile floor.
"There you go, Cuddles," she said, placing the dish in front of him.
He looked at the disgusting mess in the bowl. He wasn't going to eat that. It didn’t even smell good. His sensitive dog nose detected a savory fragrance emanating from the nearby dining table. He jumped up on a chair. A steak and baked potato stared up at him from a plate on the table. He lunged at it.
"Bad boy, bad Cuddles." exclaimed the lady, as she swatted him on the behind. "Go eat your own food and get off the table."
Bernie sulked back to his dish, looked at the contents, and turned up his nose.
A short time later, he heard the lady calling, "Cuddles, Cuddles, come here. We have company coming this afternoon. It’s time for you to get dressed."
She began tying a lacy blue ribbon around his neck.
What the hell. This sissy stuff wasn’t going to fly. He snarled and snapped at her.
"What is with you today?" asked the woman. After a brief struggle she got the ribbon on him. She slipped some lacy little socks on his feet.
He ran into another room and tried to gnaw the ribbon off, but he couldn’t get to it with his teeth. The socks prevented him from digging his claws into it. He wondered what his poker buddies would say if they saw him in this sissy attire.
The doorbell rang, and he scampered off. He found himself staring up at the doorknob, jumping and barking in excitement.
The woman went to the door and opened it. A lady with frizzy red hair stood smiling on the step. Bernie, or Cuddles as he was now known, could see another lady with gray streaked dark hair pulled into a pony tail standing behind her.
“Hello, Buella,” said the red haired one through lips heavy with scarlet lipstick.
"Hello Myrtle. Hello Gert. Come on in," Buella said.
The two entered the house, purses hooked on their arms. Gert pressed her host's hand as she entered, and said, "It’s so nice of you to have us over."
"It is my pleasure. I really enjoy our little weekly games. We are still waiting on Kay. I do hope she can make it."
Great. A hen party. He wanted to gnaw a chair leg.
The doorbell rang again.
“That must be Kay,” Buella said as she opened the door. Outside stood the hottest chick Bernie had ever seen. Short skirt, black stocking covered long legs and high stiletto heels. He could feel his juices boiling. This party was starting to liven up.
As the women chatted, Buella served refreshments. This prompted discussions about recipes and other topics of little interest to Bernie.
Finally, the women sat down to play cards. Bernie laid down where he could get a good look at Kay’s long legs, her slim ankles crossed under the card table. Finally his hormones got the better of him. He scampered under the table mounted the legs and started humping furiously.
"My word," exclaimed Kay. She kicked him off, her spike heel digging into his side. "What a naughty dog."
He retreated with a squeal.
Buella was horrified. "Oh, I am so sorry," she exclaimed. "Cuddles hasn't been acting himself today." She picked him up and carried him to a closet. She put him inside and closed the door.
Well, this was a really crappy day. First he got killed. Then he woke up as a stupid poodle and had to eat dog food. When he finally got a hot chick in his clutches, he got kicked and stuck in a closet. What else could go wrong?
After a while, the conversation and laughter outside stopped. The closet door opened.
"Come out, Cuddles, you bad dog. I guess I have to make that appointment after all".
Buella crossed the room, picked up the phone and dialed a number.
"Hello, Family Vet Services? I need to make an appointment for my doggy, Cuddles. Yes, I need to get him neutered."
Neutered. Now wait a minute. This wasn't working out at all the way he thought it should.

The Adventures of Toby and Wilbur Bear - The Beginning Begins