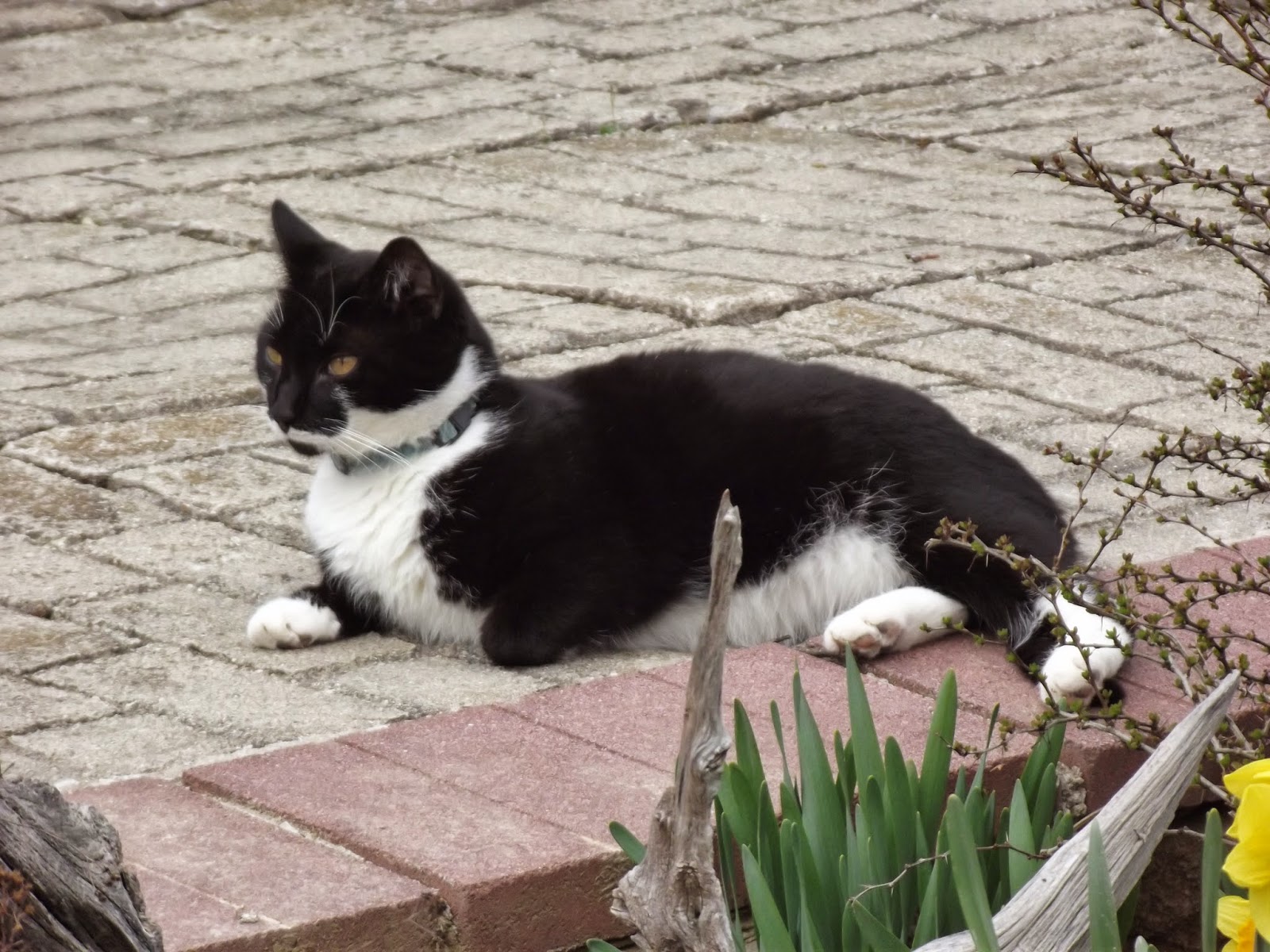 He came on a cold December afternoon. A cold wind blew hard ice pellets before it and the sky covered with cold, gray clouds. A little black and white kitten scampered past our patio door. We had lost a cat the summer before. Boots was her name and her color was almost identical to this new cat.
"Boots," I cried, springing out the door, as I thought first our lost cat had returned.
But this one was too small to be Boots and it cowered in front of the garage door, frightened and cold. I got some food and set the dish in front of the little guy and he went at it with a voracious appetite. I petted him, picked him up, and brought him in the house. He shivered for an hour or so before he warmed up. I sat by him as he filled his belly and before long he started to purr. He had a loud purr, one of the loudest I have ever heard. The other cats did not like him at first. We had five other cats. Satan, our black male, made up to him first and the two became sort of buddies. Scampy, the big tom, paid little attention to him. Midnight, our black female, sniffed at the little guy and ignored him, as did the yellow female, Lemon. Stormy did not like him at all and would attack him viciously, driving him off the food. I took to sitting by him, petting him so he could eat unmolested. It was a pattern that held through the rest of his life. Eventually he could eat unmolested, but two or three times a day, he would come and cry at me. I would then go and sit by him while he ate and he would purr and rub my hand with his head.
He was sick when he came, a respitory infection I am sure would have killed him in a short time in the cold weather. But he got well and healthy.
We named him Tuxedo, because his coloring looked like he was dressed for a night on the town. He had black fur, white gloves and shoes. He had a dapper little black goatee and white vest. He became fast friends with me and followed me around when he wasn't sleeping. The cold had penetrated him and he refused to go outside until spring, when it warmed up. He would stand at the door and sniff the cold air, then turn and run away from the door and the cold air.
We kept him in always at night. After that cold night in December, he was always in the house. He would lay on the footrest next to my feet and beg for food when we ate. At bedtime many nights, he would curl up by my feet. He would lay there until I either kicked him off in my sleep or he would jump down in the morning when I got up. Mornings he would come into my office where I kept a bowl of food for him. It was his little stash. He would eat while I played with him, scruffing the fur on his neck and rubbing his soft, black fur. then he would go outside and take his walk around the pond, sniffing at everything he encountered as he walked.
In the evenings, he would cry at me just before bed. I would have to sit with him a bit, pet him and make him purr. When I got up, he would skitter off to the food bowl and start eating as I sat by him, rubbing his fur.
I recently rearranged my office and left a shelf for him next to the computer. He would jump up on that shelf and lay on the towel I put on there for him. He would purr and look at me with half glazed eyes as I talked to him and rubbed him.
This morning he came back for his usual purr session. I played with him, and then he wanted to go out for his morning walk. I opened the door and he shot out into the darkness. It was the last time I got to see him alive.
It was a rainy morning and I lost track of him as I worked. After a couple of hours, I grew uneasy. Tuxedo just did not disappear for a few hours like that. He always turned up after his walk, wanting a turn at the food dish and a nap. I went looking for him, but did not find him. I decided to go into an area of the woods he did not usually frequent. An uneasy feeling came over me as I descended the path, calling his name. I looked off to the right and there he was, lying tangled in a patch of greenbrier. Almost overwhelmed I ran and picked him up. He was already stiff, cold and wet with the rain.
I had seen a large German shepherd dog earlier come up from that spot just after Tuxedo disappeared. It was that dog that mauled my little Tuxedo to death.
I took him to the garage, cleaned him and built him a box. His wounds were extensive and some of his fur appeared as if it were ripped off. I put him in the box on the towel he would lie on, purring, as I rubbed his neck.
Tomorrow morning at dawn, I will bury my little Tuxedo.
Posted by Paul at 6:43:00 PM

’s state parks contain a wealth of treasures for Hoosiers to enjoy. offers a wonderful mix of hiking, camping, boating and winter activities. Using A Visit to Pokagon State Park potential visitors can discover all of the activities that make visitors want to return over and over again.
Preview Chapter
Buy Direct from Author
Softbound Price - $ 6.99