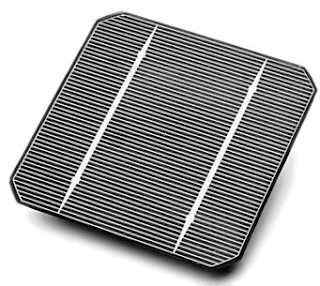 Sample Chapter
Gardener's Guide to the Solar Garden
Solar Cell Primer
Solar electric cells work by converting the sun’s energy to electricity. How a cell does this is using a process called the photovoltaic effect. This process takes advantage of certain materials called semi-conductors ability to convert light energy to electric energy when they are exposed to light. A semi-conductor is a material, either solid or liquid, which has the ability to conduct electricity at room temperature easier than an insulator but less readily than a metal. Currently the best materials for solar photovoltaic cells are crystalline silicone or gallium arsenide.
Photons
All light energy is composed of very small particles called photons. These photons leave the sun at the speed of light, traveling in a straight line to the solar cell in your garden. The photons pass through the semi-conducting material in the solar cell. As they pass through this material, they knock electrons loose from the atoms of the silicon material. These electrons are negatively charged, and as they flow through the material a positive current is also produced which flows in the opposite direction.
Hooking Them Together
Each individual solar cell produces a very small amount of electricity. So the individual solar cells are wired together in modules, which can produce enough electricity to power a small electric device. If more power is needed, the modules are wired together in an array. Arrays can produce quite a lot of power, if they contain enough modules.
Direct Current
The solar cell produces Direct Current. If Alternating Current is needed, the electricity is fed through an inverter, which converts the electricity to AC and can be used as household current.
Simple in Concept
This is a very simplified explanation of how a solar cell works. Quite simple in concept, but very complex both mechanically and scientifically.
First Solar Cell
The first person to discover this photovoltaic effect was a French physicist named Alexandre-Edmond Becquerel in 1839. The term photovoltaic emerged in 1849 by combining the Greek words, phos, which means light, and voltaic, which means electricity. An American inventor named Charles Fritts built the first solar cell in 1883. He constructed it from selenium coated with a thin layer of gold.