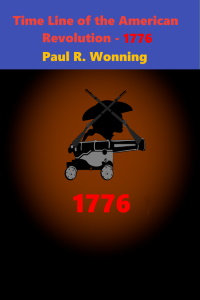 Sample Chapter
An American Revolution Time Line - 1776
Early June 1776 - Thomas Hickey Joins Conspiracy to Kill Washington
General Washington had arrived at New York on April 13, 1776 to take charge of the defenses of New York against the expected British invasion of the city. Washington occupied a mansion called Richmond Hill, in Manhattan, to use as his headquarters. The approximately 150 man Commander-in-Chief's Guard made camp on the 26 acre estate. Three taverns in the vicinity served as gathering places for these soldiers, Lowrie's Tavern, The Highlander, and Corbie's Tavern.
Wider Plot
Washington had learned earlier of a plot hatched by British Royal Governor William Tryon, holed up in the HMS Halifax in New York Harbor, and New York Mayor David Matthews to recruit regiments to resist rebel forces in the New York area. The plot went much deeper than that, though details are sketchy. Apparently the larger plot involved recruiting members of the Commander-in-Chief's Guard to kidnap, or kill, General George Washington, Israel Putnam and other senior members of Washington's staff on the eve of the British invasion. They were also to spike cannon and blow up ammunition supplies. The plot included the activation of the Loyalist forces and blowing up bridges and other strategic structures. Tryon had also employed an engraver to print counterfeit bank notes to aid in disrupting the rebel effort. Matthews had recruited a local gunsmith, Gilbert Forbes, to supply guns to Tryon's efforts and supply intelligence on rebel troop movements. If successful, the plot would probably have dealt a fatal blow to the Patriot cause.
Members of the Commander-in-Chief's Guard
Several members of the Commander-in-Chief's Guard met sometime in early June at Corbie's Tavern. It was here that a key part of Governor Tryon's plot began to take shape. Five members of the guard, William Green, Thomas Hickey, James Johnson, Matthew Lynch and John Barnes gathered to share a drink or two. Gilbert Forbes also attended the meeting at the tavern. Details are murky, however it is apparent that Forbes recruited the members of Washington’s Guard to either kill or kidnap Washington, paying them 10 shillings apiece for their efforts. He also recruited them to pass some of the counterfeit money.
Thomas Hickey (? - June 28, 1776)
Historians know little about Thomas Hickey other than that he was an Irishman that had come to the colonies as part of the force attached to Major General William Johnson's command during the French and Indian War. Hickey deserted from the British Army. When hostilities erupted between Britain and the colonies, Hickey joined the Patriot cause. He resided in Wethersfield, Connecticut and had enlisted in Knowlton’s Rangers. The commander of that unit had selected Hickey to serve on the Commander-in-Chief's Guard. Washington had met, and liked, Hickey and considered him one of his favorites. At some point he became disillusioned with the Patriot cause and began exploring ways in which he might undermine it.