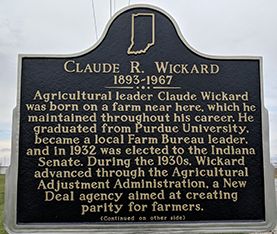 Claude R. Wickard
Location:
Carroll White REMC, 241 N. Heartland Dr., Delphi (Carroll County, IN) 46923. [South of the Hoosier Heartland (Highway 25) about one mile in the Hoosier Heartland Industrial Park.]
Installed:
2018 Indiana Historical Bureau, Carroll County Historical Society, Carroll White REMC, and Friends and Family of Claude R. Wickard.
ID#: 08.2018.1
Text
Side One
Claude R. Wickard
1893-1967
Agricultural leader Claude Wickard was born on a farm near here, which he maintained throughout his career. He graduated from Purdue University, became a local Farm Bureau leader, and in 1932 was elected to the Indiana Senate. During the 1930s, Wickard advanced through the Agricultural Adjustment Administration, a New Deal agency aimed at creating parity for farmers.
Side Two
By 1937, Wickard became a leader within the U.S. Department of Agriculture. After President Franklin Roosevelt appointed him Secretary of Agriculture in 1940, Wickard ensured the agricultural production necessary for Allied victory in WWII. In 1945, he became chief of the Rural Electrification Administration, which increased farmers’ production and standard of living.

Short History by the Author
Claude R. Wickard (February 28, 1893 – April 29, 1967)
The son of Andrew Jackson and Iva Lenora Kirkpatrick Wickard, Claude was native to Campden, Indiana. He enrolled in Purdue University in 1910, however he had to delay his studies when his father became ill in 1911. He completed the planting and returned to Purdue after harvesting the corn. After graduating in 1915 he returned to the family farm. He became associated with the Democratic Party and the New Deal policies of Franklin Delano Roosevelt. Rising to prominence in the party, coupled with his success as a farmer, he gained election to the Indiana Senate in 1932. His progressive farming methods led to his appointment as Undersecretary of Agriculture under Secretary of Agriculture Henry A. Wallace. Wallace resigned to run for Vice President in 1940. Wickard became the Secretary of Agriculture after Wallace's resignation. During World War II he headed the War Food Administration and used the position to help farmers aid the war effort with increased food production. In 1945 Wickard gained appointment as the head of the Rural Electrification Administration, a position he held until 1953. He resigned that year to run for the United States Senate. Republican Homer E. Capehart defeated him in the election. Wickard died in an automobile accident on April 29, 1967. He is interred at Maple Lawn Cemetery in Flora, Indiana.