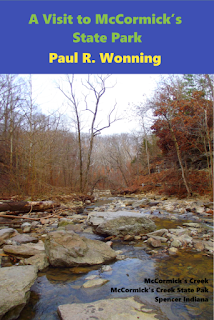 Sample Chapter
Short History of Fire Fighting - Indiana Edition
McCormick's Creek Fire Tower
Used as an active fire tower from its construction in 1935 until 1967, the McCormick's Creek Fire Tower now serves as a popular observation site for park visitors. Constructed by CCC Company #589, the tower is located on Trail 4 near the Park Office. The elevation of the land the tower sits in is 770 feet  above sea level. The eighty-six foot tall tower's lookout cab measures seven feet along each wall with windows containing nine panes on each wall. The National Historic Lookout Register registered the tower on November 12, 2008. The tower underwent an extensive renovation in 2017. The park has opened the tower to the public.
Posted by Paul at 9:31:00 AM