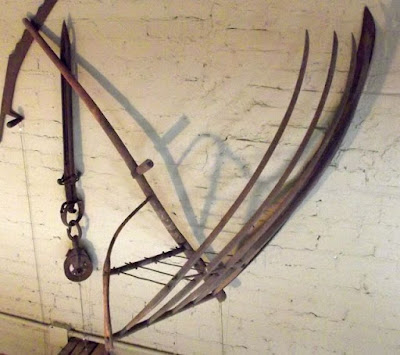 Preview Chapter
Short History of Gardening and Agriculture
Reaping Grain
Cradle Reaper
Also called the cradle scythe or grain cradle, this implement was an adaptation of the scythe. Developed sometime before 1800, the cradle reaper began to see widespread use between 1800 and 1840 in the United States. The cradle reaper consisted of a set of wooden finger shaped spokes attached to the handle of the scythe. The purpose was to catch the stalks of grain and keep them aligned when cut, to make it easier to tie the cut grain into shocks. The McCormick Mechanical Reaper eventually replaced it.
Mechanical Reaper
Several inventors toyed with devising a mechanical reaper during the Nineteenth Century, however it was Robert McCormick that first came up with a design for a working reaper in 1831. He was unable to perfect the device, so he asked his son John to improve it.
Posted by Paul at 8:40:00 AM