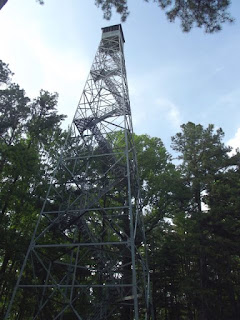 The Lookout Tower System
Fire was a common problem in the vast forests that covered the United States. In the years before the founding of the United States Forest Service in 1933 many private lumbering companies, townships and State Forestry organizations had fire lookout tower systems in place. During the 1930's the United States Forest Service, using Civilian Conservation Corps workers, began building fire towers. The first fire towers were simply platforms in tall trees with a ladder steps nailed into the tree leading up to them. Over time, they refined the design to reflect that of the fire towers still visible in many state parks, forests and National Parks across the country. Idaho had the largest number of fire towers in the United States, with a total of 966. 196 of these towers still exist. The equipment and facilities surrounding the fire tower included communication equipment, a psychrometer, an alidade, a cabin or guard station, a latrine, and a garage.
Communication Equipment
The communication equipment could include a telephone, radio or both. Since most of these lookout towers were located in remote areas they often served as the communications link between the rural population and the outside world. Many times the telephones or radios were the first ones installed in the area. Telephones required the installation of miles of cable that then had to be maintained between the various towers.
Psychrometer
The tower man used an instrument called a psychrometer to measure the relative humidity. This was important to know as the lower the relative humidity, the greater the fire danger. The psychrometer uses two thermometers, a dry one and a wet one, to determine humidity. The tower man measured the temperature difference between the wet thermometer and the dry thermometer and calculated the humidity using a special chart.
Alidade
The alidade is a circular device invented for use in surveying and map making. It consisted of a circular disc that had compass points marked around outside edge. Two vanes with sighting slits on opposite sides of the wheel attached to a rotating wheel, also on the outer edge of the disc. This is called a swivel range finder. A thin steel rod, called a sighting wire, connected the vanes. A printed topographic map was glued to the disc. The alidade was located in the center of the cabin. When the tower man sighted smoke, he could line up sighting wire with the smoke. The tower man then fixed the precise location of the tower by using a mathematical calculation measuring the angle of intersection with another nearby tower. The tower man could then dispatch a fire crew to the fire's location.
Cabin or Guard Station
Usually located at the base of the tower, the cabin housed the tower man during times of high fire danger. Usually it was a two room cabin.
The Tower Man
The tower man spent many hours at the top of the tower during periods when fire danger was high. At other times the tower man helped survey land lines, mark timber, route signs and worked on forest maintenance projects. When fire danger was high, the Forest Service hired local farmers to help staff the tower. During these times they would sometimes station a small fire crew near the tower that could be dispatched out as soon as a fire was sighted. During dry weather there would sometimes be four or five fires a day for these crews to extinguish. Usually staffed by men, women also made up a portion of the tower man ranks, especially during World War II. The tower man had to pass a vision test and be physically fit enough to climb the tower several times a day. In addition to watching for smoke plumes, the tower man coordinated fire crews while they were out fighting a fire, kept records of the fires, kept weather records, cleaned the privy and maintained the grounds around the tower.
Obsolete
The advent of using airplanes and other modern methods of detecting fires has made the fire tower obsolete. Only nine fire towers remain in Indiana.
Follow this link to see the list.