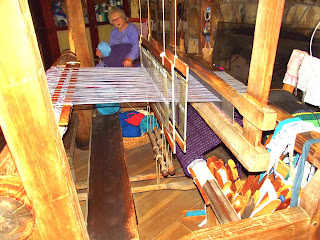 Spinning tufts of fiber into thread, or yarn, is a craft that dates back to prehistoric times. The earliest form of spinning fiber into yarn was to roll tufts of fibers down the thigh with the hands. The rolling action twisted the fiber into yarn. The spinner kept adding tufts until they had the desired length. The next step up in spinning technology was to wind the fibers in a loose wad around a long stick called a distaff. The spinner attached a few strands of fiber to a tool called a spindle, which is a short, round, weighted stick. The spinner spins the loose fibers, twisting them, while pulling more fibers from the distaff. As the resulting yarn gains length, the spinner stops to wind the yarn around the spindle, and continues the process until they have a roll of yarn, ready for weaving into cloth. This was a daily chore that women performed, spinning wool, flax fibers, cotton or animal hair into thread. Historians are unsure of when the first spinning wheels appeared, however many think the originated sometime around 1030 in the Arabian world. From there, it spread to China and then to Europe. The spinning wheel was the first step in mechanizing the spinning process. Using the spinning wheel, the spinner starts twisting the wool with the fingers to form a thread by hand. When the spinner has a sufficient length, they thread the yarn through an orifice in the end of the spool, through hooks on a part of the spinning wheel called a flyer. The yarn is then tied securely onto the spool. The spinning wheel has groves that run to another groove on the end of the spool. An arm of the wheel attaches to a foot pedal by means of a crank. When the wool is secured to the spool, the spinner holds the bundle of fiber in the hand and gives the wheel a gentle push, starting it. The spinner can then work the fibers into thread, called carding, which the flyer twists before it wraps around the spool. The spinner keeps the wheel spinning by pumping with the foot while performing this operation. The spinning wheel made the spinning process go much faster than using the distaff and spindle.

This was the process used to spin cotton, wool, flax and other fibers into yarn for centuries. Lewis Paul and John Wyatt devised the first type of mechanized spinning in 1738. Over time water wheels and then steam engines provided power for the spinning apparatus. Today the process has been fully mechanized, however many crafters still practice the age old art of using the spinning wheel and the spindle and distaff methods.
Weaving
Weaving threads into cloth is an ancient art that dates back into prehistory. Archeological evidence indicates that it appeared independently in the Middle East, Africa, Asia and the Americas at different times. The simplest form of weaving was the band weaving method. In this process, the weaver simply tied thread to two sticks an equal distance apart. Then she would weave the cords, or thread, between the tied threads, creating narrow bands of cloth. They could wrap these narrow bands around them to form skirts, kilts or other apparel. Or they could sew the bands together to make something larger. Sometime around 6000 BC weavers started building looms. The first ones were simply a wooden frame on which they could tie the thread, or cord, and then weave other threads between them. This was a slow process and the cloth produced this way was quite expensive. Over time they developed the shed rod, which is a stick you could run between the threads fastened on the loom, separating every other thread. They next used a tool called a sword to raise half the cords at the same time. The invention of a device called a heddle road, sometime around 500 BC, allowed the weaving process to go much faster, lowering the price of the finished cloth. People living in different areas of the world used different types of cloth. In South America the natives used cotton and the fur of alpacas and llamas. In Medieval Europe it was mostly wool, linen, nettle cloth and cotton. Asia developed the silk industry, but also wove using various types of plant fiber like abaca and banana. Other improvements to the loom and the weaving process in the Eighteenth Century during the Industrial Revolution led to the construction of large mills in which thread was spun and then woven into cloth.
© 2020 Paul Wonning
Posted by Paul at 6:25:00 PM