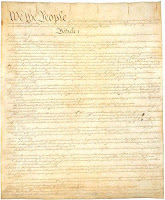 Sample Chapter
Short History of Political Parties
James Madison on Political Parties
Like Washington and many other of the Founding Fathers, Madison distrusted political parties during the time the men labored at crafting the document. Unlike Washington, Madison came to embrace political parties as a means of controlling differing political factions.
To understand Madison's view, we must first understand the two fundamental fears of the Founding Fathers. These were consolidation of power and fear of the majority. The Framers designed the Constitution to inhibit any faction from gaining supremacy and that majority rule would be difficult for any faction to achieve. Madison's view evolved to a point that he believed that the key to controlling factions was to create a large number of them, ensuring that none could achieve a majority. Madison defined a faction as:
“a number of citizens, whether amounting to a majority or minority of the whole, who are united and actuated by some common impulse of passion, or of interest, adverse to the rights of other citizens, or to the permanent and aggregate interests of the community.”
Many readers will see the modern special interest groups as the embodiment of Madison's definition.
Madison came to believe that the best way to avoid the tyranny of the majority was to expand the political sphere of the United States as much as possible, fragmenting political factions and preventing any one faction from gaining a majority. This would force factions to compromise and encourage consensus government rather than the tyranny of majority rule. The construction of the Constitution thus discourages rapid change of policy. Instead, it encourages gradual change over a long period of time, allowing society to gauge the success of certain policies and allow for change along the way. Madison came to understand that political parties were necessary for the proper functioning of the Constitution.
Madison called the form of government that he had helped creat an "Extended Republic."
Note that he did not call it a democracy.
A democracy is a governmental form in  which the people participate directly.
A republic is a form of government in which people elect representatives to represent their views.
In explanation, Madison wrote in the Federalist Papers:
“The two great points of difference between a democracy and a republic are: first, the delegation of the government, in the latter, to a small number of citizens elected by the rest; secondly, the greater number of citizens, and greater sphere of country, over which the latter may be extended. The effect of the first difference is, on the one hand, to refine and enlarge the public views, by passing them through the medium of a chosen body of citizens…”
Madison believed that an extended republic diluted the power of factions. He believed that a democratic form of government would lead to tyranny.