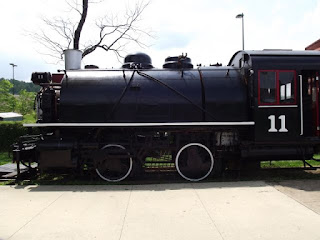 Sample Chapter
Short History of the Railroad
Delaware and Hudson Canal Company
Two states, New York and Pennsylvania passed laws in 1823 and 1826 authorizing the construction of a canal, primarily to transport anthracite coal from the Wurts' mine in Pennsylvania from the Delaware to the Hudson River. Canal officials broke ground on July 13, 1825. The Delaware and Hudson Canal Company opened for business in October 1828. The Pennsylvania assembly authorized the construction of a gravity railroad, owned by the Delaware and Hudson Canal Company to transport the coal from the mine to the canal.
Delaware and Hudson Gravity Railroad
The Pennsylvania assembly authorized the construction of the April 8, 1826 on April 8, 1826. The railroad company tried the first steam locomotive to run in the United States, the Sourbridge Lion, on August 8, 1829. The name derived from the lion's face that adorned the front of the locomotive. The Foster, Rastrick and Company of Sourbridge, England manufactured the locomotive earlier in the year. The company had transported the locomotive in parts from Liverpool to New York on the ship John Jay. It arrived sometime in June or July and was taken to West Point Foundry in New York where workers assembled it. They tested it at the foundry, igniting the curiosity of nearby people. After transporting the locomotive to Honesdale, Pennsylvania, company officials prepared it for its first demonstration run. The company had specified that the locomotive weigh no more than four tons, as they had constructed wooden tracks with iron strips fastened to them. The locomotive actually weighed in at over seven tons. The engine operated admirably doing its three mile test run on August 8 1829. However, it was far too heavy for the rails and was never used. Workers used the locomotive for parts. The Smithsonian Institute acquired the boiler and a few other parts, which was all that was left, and has it on display in Washington DC.
Posted by Paul at 1:37:00 PM