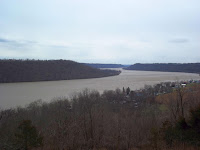 01-30 - Ohio River Drive
We departed the park sometime around 2:30 PM and journeyed west on Indiana State Road 56 to the entrance to Hanover College, on the eastern edge of the little town of Hanover, Indiana. This road, called Scenic Road on Google Maps, has no sign other that the large Hanover College at its entrance. The road's name is indicative of its nature, as it curves along about a half mile, at times clinging to the side of a cliff that overlooks the canyon below. Sometimes drivers can catch a glimpse of the Ohio River. 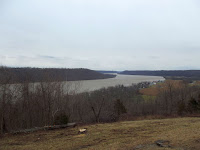 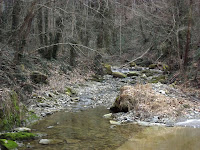 Founded in 1827, Hanover is the oldest private college in Indiana. Affiliated with the Presbyterian Church, the liberal arts college's campus occupies a beautiful spot overlooking the Ohio River. Visitors driving through the campus can stop at a parking lot and walk along a sidewalk that has several spots to stop and partake of the magnificent view. From the college, we proceeded to drive down the hill on Hanover Beach Road. Hanover Beach is a small riverfront hamlet located on the banks of the Ohio River. We drove through the town, and continued our drive along County Road 366 West. This road soon turns from blacktop to gravel and led me to wonder what I was getting us into, as it was one lane and seemed to wend its way along the river, easily in view just a short distance away. The river was up, due to the recent rains which had melted the ample snowfall we had received earlier in the month. 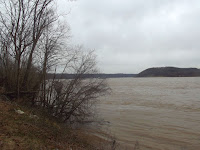 Pretty Road
The view of the river from this doubtful looking road proved to be well worth the drive. In a couple of spots hairpin turns provided lovely spots to stop and admire the river, which lay just a few feet above the road at one point. Steep canyons to the left of the roads had small streams which drained into the river after tumbling over scenic waterfalls. We were able to observe, at close quarters, a large barge traveling downriver laden with cargo. 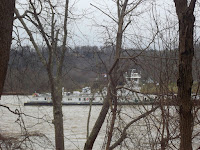 End of the road
I had intended to drive several miles along this road; however after we passed 10 Cent Road, the road came to an abrupt end, as the river level had risen to cover the road. A large sign announced that the road was closed due to flooding. After stopping the car, I walked to the waters edge and could see the course of the road, now inundated under several feet of river water. Disappointed that our road trip had ended so soon, I resolved to come back at a later time when the water was down to continue this pretty drive. We returned 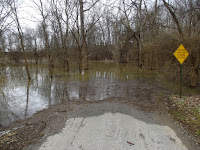 to the highway on 10 Cent Road and a few other roads too numerous to get into. We drove into Madison to drive along the Riverfront Park, and returned to the Inn for dinner in the restaurant. 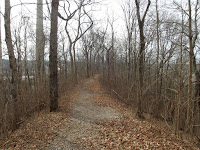 Clifty Falls Adventure - Part 2
01-29 - Trail 1
During the second day of our stay at Clifty Falls I elected to take a short winter hike to along Trail 1 to the observation tower. It is just a short distance, maybe a half mile that passes the Nature Center, which is closed for the winter. The temperature was around 40 degrees, so it wasn't too cold, and there were other people on the trail. The trail to the observation tower crosses on top of a ridge that affords a nice view of the forested land below. Since it is winter, there are no leaves on the trees to block the view. 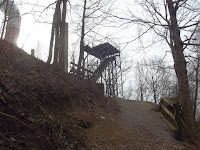 Observation Tower
At the observation tower I encountered two men at the top who were planning to continue their hike across Clifty Creek and around park. The wife and I had done this hike many times and I told them it was a good hike, provided they could cross Clifty Creek. The creek level was up and there was no bridge to carry the trail across the creek. 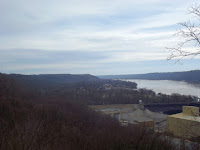 Continuing On
After admiring the scenery from the top of the tower, I decided to continue the hike to the junction of Trail 1, 2 and 3. This short spur is about a half mile long. Since the leaves are off the trees, this little jaunt provided me with a great view downriver not visible during the summer and fall months. I had followed the men I had met previously until they reached the junction where they paused to study their trail map. Then, they began their descent down Trail 2 to cross Clifty Creek. I saw them no more, so I do not know if they completed their hike or not. 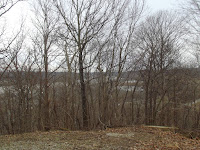 Trail's End
Upon reaching the junction, I simply turned around and returned to the Inn. I had planned a nice drive along backloads for the afternoon's adventure. We dined at the restaurant and headed for the car for the next expedition. 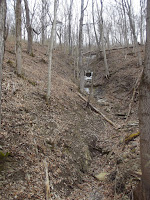 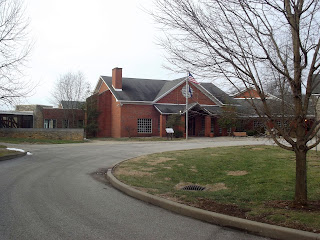 01-29 - Clifty Inn
We have just completed a relaxing two day vacation at Clifty Falls State Park Inn near Madison, Indiana. Our stay began on Sunday, January 27. The park is about an hour's drive from our house near Napoleon, Indiana. We departed around noon and arrived at the park around 1:00 pm. We had reserved a park side room, however when the desk receptionist informed me that we were on the second floor and asked if steps were a problem, I said a first floor would be better. After searching through her database, she said no first floor rooms on Park side were available; however she would upgrade us to a Riverside room at no extra charge. 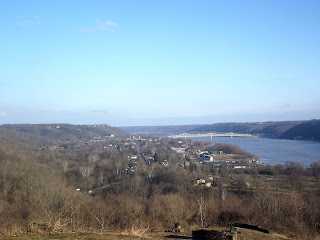 Park side and Riverside Rooms
Riverside rooms all face the Ohio River and have patio doors that provide a grand view of the river and a bird's eye view of downtown Madison, Indiana. The ground floor units have a small patio with a couple of chairs and a small table. This being January, we did not notice anyone using any of the tables. The Park side wing's rooms all face the park. They are nice rooms; however they do not have as good a view. The Inn charges a premium for the Riverside rooms; however we were taking advantage of the State Park System's two for one deal they run over the winter months in which you can stay for two nights for the price of one. 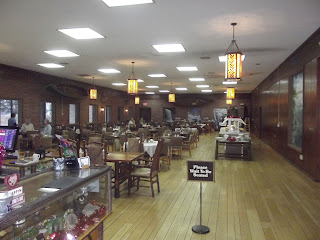 Clifty Inn
We would take every meal during our stay at the Clifty Restaurant. The restaurant offers a buffet most nights, however diners may order off the menu. The restaurant has breakfast, lunch and dinner hours posted, however it does close for a couple of hours in the afternoon. The Inn also allows room visitors to carry in food to eat in their ample great room in front of the fireplace. Upon our arrival, we noted that some guests were staging a birthday party for a little girl in the dining area and had a table heaped with homemade munchies for the party. Party guests were scattered about, watching television, 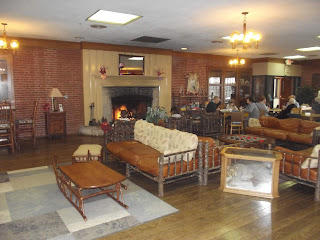 playing cards or just sitting in front of the large fireplace. The Inn has plenty of other little nooks and crannies, and one other fireplace, for guests to sit and enjoy a book in solitude. A swimming pool located near the great room and restaurant has a hot tub and plenty of room for a swim. A sunroom lined up with rocking chairs allows guests to relax with a book while admiring a nice view of the Ohio River. The Inn also has banquet rooms that they allow guests to rent for events, catered by the restaurant. Inn guests can also enjoy complimentary coffee, excellent, by the way, in a refreshment room just off the guest room. 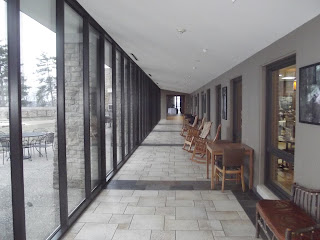 Relaxing Day
After checking in, the wife spent the rest of the afternoon reading while I dove into a pile of seed catalogs to begin planning next year's vegetable garden.

American History A Day at A Time - 2 Book Set 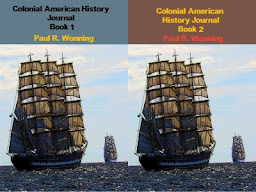 
Description
Beginning and veteran gardeners will find the Gardeners Guide to Growing Vegetables an essential manual for the culture, harvest, storage and pest control of almost thirty popular garden vegetables.