December 23, 1750 - Ben Franklin Attempts to Electrocute a Turkey
Ben Franklin spent many hours studying the force known as electricity, an energy source scientists knew little about in the Eighteenth Century. His December 23, 1750 attempt to electrocute a turkey left the turkey safe and sound. Franklin, however, was quite shocked by the experience.
Retirement, Science and Philanthropy
By 1750, Franklin had retired from the printing business and spent his time doing various scientific, educational and philanthropic activities. The greater part of his time, he spent studying the force that Archibald Spencer had introduced him to seven years before. Franklin had acquired an assortment of Leyden jars, glass rods, silken threads and other equipment he used to study this mysterious force. His efforts had led to a device he called an electrical jack, a rotisserie device he used to turn chickens and turkeys over a fire. He had gathered an assortment of friends to watch as he used electricity to kill the bird, then roast it over a fire he had kindled using a bottle he had electrified. He would roast the turkey over the fire using the electrical jack he had invented. Sometime before December, he had already successfully electrocuted some turkeys and chickens, so he knew the process worked, killing the birds quickly and, he felt, made the meat more tender by the process.
The Turkey Escapes
Franklin had readied his equipment, storing static electricity in over forty Leyden jars. The crowd had gathered to watch and eat turkey. As Franklin prepared to shock the bird, somehow he touched the electrical leads himself. The watching crowd heard a loud "crack" as an orange cloud of fire engulfed Franklin. The shock left Franklin dazed and sore. He later wrote his brother John, relating the experience, “I have lately made an experiment in electricity that I desire never to repeat. Two nights ago, being about to kill a turkey by the shock from two large glass jars…I inadvertently took the whole through my own arms and body…Do not make [this] more public, for I am ashamed to have been guilty of so notorious a blunder."
Relenting
He relented, wishing to charge other scientists studying this force to take care during their experiments. He wrote about the experience in his book, “Experiments and Observations on Electricity.” This book had helped lead him to winning the coveted Godfrey Copley Medal in 1753.
Back to Sample Page

A History of the Telephone

A History of the Telephone 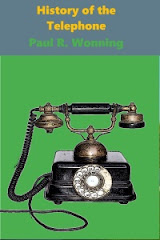