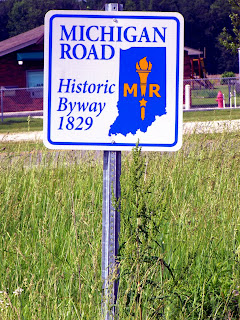 January 16, 1836 - Assembly Passed Mammoth Internal Improvement Act of 1836
The Indiana General Assembly passed what many hoped would be a financial boon for the developing state of Indiana. Instead, the Act led to financial ruin.
The State of the State in 1836
When Indiana became a state in 1816, the state was a vast network of forest, prairie, rivers and streams. White settlement clung to the southern counties along the Ohio River, with a sliver of settlement along the Wabash River in the west. Amerindian tribes still claimed the northern two-thirds of the state. By the 1830's, the situation had not changed much. Indianapolis, the new state capital, was a muddy pioneer settlement along the White River. The southern counties had access to the Ohio River, the only good means of transportation. Since only the Wabash River was navigable, other parts of the state had no access to reliable transportation systems. The only roads were a loose, unorganized network of trails cut through the wilderness. The state had begun construction on the Michigan Road, slated to be a main artery between Lake Michigan and Madison on the Ohio River, but construction would not finish until the 1840's. The Buffalo Trace provided a rough highway from Vincennes to Clarksville. By 1830, Indiana had a population of about 600,000 people. Tax revenues for the state totaled around $50,000.
Tax Revenue
Indiana had two sources of tax revenue in 1830, property taxes and poll taxes, each providing about half the state's revenue. Indiana and other states admitted to the Union after 1803 were prohibited from taxing land purchased from the federal government for a period of five years. Thus, by the mid 1830's, vast areas of land that it could not previously tax were entering the tax base. In addition, land sales remained high in the state during the period, so more lands would continually enter the revenue stream.  Indiana expected to double its tax revenue in just a few years. Moreover, anything the assembly could do to increase land values would increase tax revenue. This was especially true if the state switched to a different tax system. The state used a per acre tax system, placing a greater tax burden on agricultural land. The state switched to an ad valorem system in 1835, which permitted the state to tax both land and personal property at a rate based on its assessed value. This system reduced the burden on farmers and increased it on merchants, homeowners and manufacturers.
The Geographic Quandary
The rising star of transportation in the early 1830's were canals. New York had great success with the Erie Canal and there were other examples. Railroads had not yet become mainstream. Thus, most states had canal construction projects. The problem with canals is that they are geographic specific in the benefits they bestowed and widespread in the taxing requirements to produce the revenue to finance them. The assembly struggled for years over this problem. How to tax everyone in the state for a canal that would only benefit one geographic region was the unanswerable question. The answer seemed to be, build them all at once and jump-start an economic boom everywhere in the state. This is what the Mammoth Internal Improvement Act of 1836 sought to do.
Mammoth Internal Improvement Act of 1836
Signed into law by Governor Noah Noble, the act was meant to be his crowning achievement. The law authorized the Indiana Central Canal, the Whitewater Canal, the Wabash and Erie Canal, the Madison and Indianapolis Railroad, paving the Buffalo Trace and Michigan Road. The bill provided for a Board of Internal Improvement, which was authorized to borrow up to ten million dollars, based on the good faith and credit of the State. Jubilant celebrations took place all over the state with the passage of the bill. Governor Noble was cautious because the Assembly had passed the spending portion of his program, but had not followed his tax increase recommendations.
Too Much at Once
The aims of the law, while noble, were much too ambitious. Construction of canals is an expensive business. Construction of the Whitewater Canal was impaired by a flood that washed out much of the completed work. Many of the sites slated for canal construction were in reality not suitable sites. Then the Panic of 1837 set in.
Panic of 1837
This complex event created an economic depression that lasted from about 1837 until 1842. The multiple causes were questionable lending practices in the Western United States, restrictive lending policies enacted by Great Britain and falling agricultural prices. The period before 1837 had been a period of intense economic growth. During this time the prices of cotton and other commodities rose. Land prices also increased. The Bank of England noticed a decline in cash on hand in 1836. They raised interest rates in an attempt to attract more cash. When the Bank of England raised its interest, it forced banks in the United States and other nations to raise their rates. This, along with other events, caused land and cotton prices to fall. The chain of events this set off triggered a depression that caused profits, prices, and wages to fall and increased the unemployment rates. It was not until 1843 that the economies of the major countries rebounded.
Tax Revenues Fall, Then Disaster
The conditions induced by the Panic created an economic depression. Land values fell, as did tax revenues. Instead of having more revenue to work with, the State found itself with less. By 1841, tax revenues were $72,000 while interest payments on the debt reached $500,000. The State was bankrupt. The State had not completed any of the slated projects. It was left to Madison's James F.D. Lanier to use his financial wizardry to convince creditors to take over the projects for a fifty percent reduction in the debt. Creditors were only able to complete two of these projects. Lanier also aided the state with two loans totaling one million dollars. The State managed to repay it by 1870.
Thus, what many consider the biggest legislative debacle of all time ended.